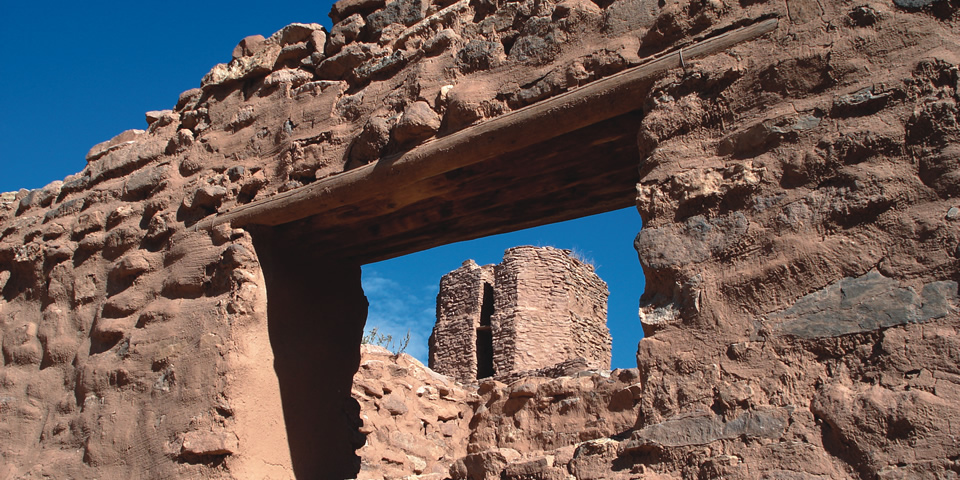 The Jemez Indians established the Pueblo of Giusewa (pronounced Gee-say-wah) among the hot springs of Jemez Valley around AD
1350.

It was a multistory village which may have contained as many as 1,000 rooms. Giusewa was first visited by Spanish in 1541. Later, in 1598, Franciscan missionaries came to convert the Jemez People to Christianity. By 1621, the priests along with their Native American converts had constructed San José de los Jémez Mission. However, the missionary effort ultimately failed. Brought on by suppression of the Native religion and a devastating drought, the Jemez joined the Pueblo Revolt on August 10, 1680. This culminated in the removal of the Spanish from northern New Mexico for the next 12 years.

The San José de los Jémez Mission, built in the Western Baroque style, rises at Giusewa with massive eight-foot-thick stone walls. An interpretive trail winds through the majestic site. An exhibition in the Visitor’s Center presents the history and culture of the Jemez People in their own words. Lodging and food are available in Jemez Springs.

Open Wednesday through Sunday, 10am to 4pm. Closed Monday and Tuesday.